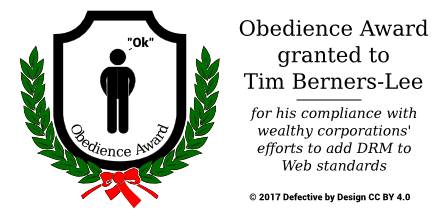 FOR IMMEDIATE RELEASE—Boston, Massachusetts, USA—Thursday, April 13th, 2017—Today Defective by Design granted Tim Berners-Lee the first ever Obedience Award, recognizing his work to help wealthy corporations add DRM (Digital Restrictions Management) to official Web standards. Inspired by the MIT Media Lab Disobedience Award, the Obedience Award highlights activity upholding the status quo despite an overwhelming ethical case against it. Today is the first opportunity for the addition of DRM to become final as per the formal process for setting Web standards.

As the director of the W3C (World Wide Web Consortium) Berners-Lee previously fought to advance Web users' rights, supporting net neutrality, privacy and universal access. Born in the UK, he was knighted by H.M. Queen Elizabeth in 2004 and awarded the Order of Merit in 2007. Most recently, he received the Association for Computing Machinery's A.M. Turing Prize.

Though he was previously critical of DRM, Berners-Lee decided not to take a stand against Netflix, Microsoft, Google, and Apple when they began developing a Web standard for streaming video DRM, instead encouraging them to do so within the W3C. These wealthy companies supply copious membership dues to the W3C.

Their proposed standard, EME (Encrypted Media Extensions), will be the first W3C specification designed specifically to control and restrict users. As of today, EME has progressed through the entire W3C development process, and awaits Berners-Lee's final decision to approve or veto it as an official part of the Web.

Defective by Design and a coalition of organizations have warned that standardizing Web DRM would lead to an increase in the amount of restrictions encountered by users, as creating them becomes cheaper and easier. They argue that EME will invite more abuses of users like the Digital Editions DRM, which was found to be exposing user information to snoopers, and more digital restraints preventing important, legal things that people do with media, such as accessibility modifications, translation, commentary, and archiving. Many are concerned that, should Berners-Lee allow the W3C to add DRM to video standards through EME, existing efforts to DRM-encumber text and image standards would be accelerated.

Since the beginning of EME's development, the proposal has faced dissent from within and outside the W3C. In the last month, hundreds of concerned Web users have telephoned Berners-Lee to demand he reject EME, while a UNESCO (United Nations Educational, Scientific and Cultural Organization) official, two members of the European Parliament, and a coalition of human rights groups published statements urging him to reconsider. In 2016, demonstrators protested against EME at the W3C's meetings in March and September, as the Open Source Initiative and a group of high-profile security researchers urged Berners-Lee not to ratify EME without additional protections for those harmed by DRM. In 2013, a coalition of organizations led by Defective by Design wrote a letter opposing EME and more than 34,000 people signed an anti-EME petition.

Presenting the Obedience Award, the Defective by Design team issued this statement:

"Overcoming his lifetime history of visionary work and his initial ethical concerns with DRM in Web standards, Berners-Lee turned a blind eye to the diverse groups opposing Encrypted Media Extensions. This man persevered to champion the interests of wealthy media and technology corporations. For his commitment to obedience, we recognize him today."

Defective by Design requests that readers who are impressed with Berners-Lee's tenacity take five minutes to call him about EME, giving him a chance to further prove his commitment to obedience.

The Obedience award echoes a 2013 "Oscar for Best Supporting Role in The Hollyweb" granted to the W3C as a whole for beginning work on EME.

Learn more about Encrypted Media Extensions and the campaign to stop it.

About Defective By Design

Defective by Design is the Free Software Foundation's campaign against Digital Restrictions Management (DRM). DRM is the practice of imposing technological restrictions that control what users can do with digital media, creating a good that is defective by design. DRM requires the use of proprietary software and is a major threat to computer user freedom. It often spies on users as well. The campaign, based at defectivebydesign.org, organizes anti-DRM activists for in-person and online actions, and challenges powerful media and technology interests promoting DRM. Supporters can donate to the campaign at https://www.defectivebydesign.org/donate.